Critical Zones: The Science and Politics of Landing on Earth

This monumental volume, drawn from a 2020 exhibition at the ZKM Center for Art and Media, portrays the disorientation of life in a world facing climate change. It traces this disorientation to the disconnection between two different definitions of the land on which modern humans live: the sovereign nation from which they derive their rights, and another one, hidden, from which they gain their wealth—the land they live on, and the land they live from. Charting the land they will inhabit, they find not a globe, not the iconic “blue marble,” but a series of critical zones—patchy, heterogenous, discontinuous.
With short texts, longer essays, and more than 500 illustrations, the contributors explore the new landscape on which it may be possible for humans to land—what it means to be “on Earth,” whether the critical zone, the Gaia, or the terrestrial. They consider geopolitical conflicts and tools redesigned for the new “geopolitics of life forms.” The “thought exhibition” described in this book opens a fictional space to explore the new climate regime; the rest of the story is unknown. 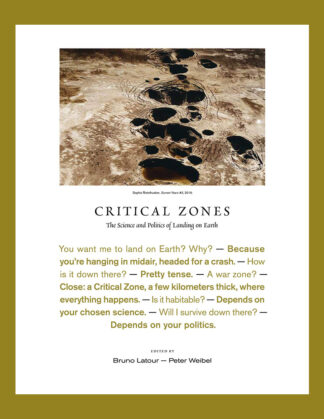 You're viewing: Critical Zones: The Science and Politics of Landing on Earth €66,50
Add to cart
0