Virtuous situations from the industrial past and some ideas for the future climatic metropolis (the cases of Brussels and Paris) compiles examples and projections that question the shape given to the city and territory at a moment of paradigm shift.
The rapid evolution of climate change is leading to a clear state of emergency that is going to redefine the values and forms of our society and its territories. Several signs of a gradual paradigm shift have appeared and citizen voices are being raised against a social model that is at odds with the environment. Looking towards the past, a fascinated reading of a city’s ability to transform itself radically when necessary, is proposed.
The change, generated by the race towards industrialization and social emancipation, forced metropolises such as Brussels and Paris to develop new urban functions and logics. This evolution took shape in territories that were not yet highly urbanized, but also within the city itself, in negotiation with the existing context. A series of 23 situations from the industrial age draws a panorama of virtuous examples, illustrating an assumed cohabitation between the urban fabric and the infrastructural, productive and energy needs at a precise moment of radical change in Paris and Brussels.
The development of the ‘climatic metropolis’ must imperatively be based on design values and principles capable of generating a common vision. In this perspective, we propose some ideas for reflection formalized by projects tied to the built stories from the past, outlining potential situations of a new state to come for the European city. 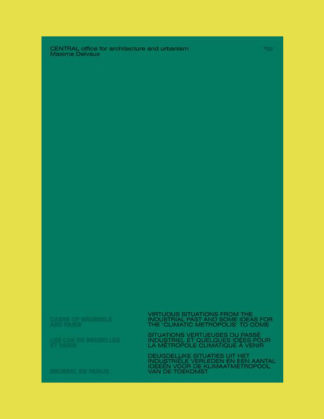 You're viewing: CENTRAL office for architecture and urbanism & Maxime Delvaux €20,00
Add to cart
0