Bernd Lohaus (1940-2010) was a contemporary German sculptor, painter and draftsman living in Belgium. He studied from 1963 to 1966 at the Düsseldorf Art Academy where his mentor was Jozef Beuys. In 1966 he married his wife, Annie de Decker, and in their home they founded the avant-garde gallery Wide White Space, where in 1966 Marcel Broodthaers and in 1967 Joseph Beuys exhibited. Panamarenko was also able to show his work there. The gallery existed until 1976.

Bernd Lohaus mainly worked with wood, stone and paper. Lohaus only carried out minor interventions on the wood found, such as applying short texts. The relationship of objects to each other and to space was important. Lohaus used the language as an element in various of his works. In his work, the artist investigated the relationship between the artist, the viewer and the artwork.

Bernd Lohaus: IM SEIN BEI is the most comprehensive and thoroughly illustrated monograph devoted to the artist to date. Across a wide variety of mediums – sculpture, installation, painting, drawing and writing – Lohaus distilled materials to their unadorned essence, while infusing them with poetry through the stark selection of words and colours. Edited by Thomas Desmet, designer and editor who has worked with artists and writers for more than ten years, and Stella Lohaus, the director of LLS LLS Paleis (formerly known as LLS 387), an independent and non-profit art space in Antwerp, and daughter of Bernd Lohaus. The book includes essays by Lorenzo Benedetti, Marie-Pascale Gildemyn, Ulrike Lindmayr and Dieter Schwarz. 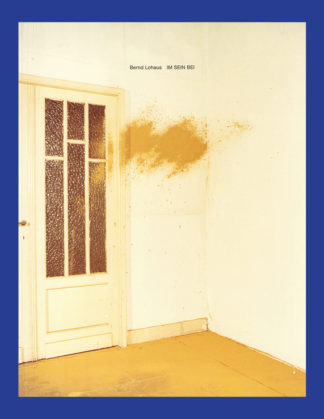