Berlin: City Without Form. Strategies for a Different Architecture

Berlin was shaped by the events of the twentieth century in a process of “automatic urbanism.” More than any other metropolis, the city absorbed the forces of that epoch ― modernity, fascism, two world wars, Stalinism, socialism, the Cold War, revolt, capitalism ― and gave them form.
This book shows how even today, opposed ideological, political, economic, and military forces continue to produce unplanned structures and activities and urban phenomena beyond the categories of urban design and architecture that conceal rich potential. Berlin reveals particularly clearly phenomena that have shaped urban development in the twentieth century in other places as well: conglomeration, collision of borders, ­destruction, void, mass, metabolism, and simulation.
The present book, which caused a sensation when first published in German twenty years ago, is now being published in English for the first time. Its surprising and informative analysis of ­Berlin as a prototype of the modern city destroys the ideologies of heroic modernity as well as the new nationalisms and shows how the modern city “as found” can become the point of departure for new forms of context-specific architecture and urban planning. 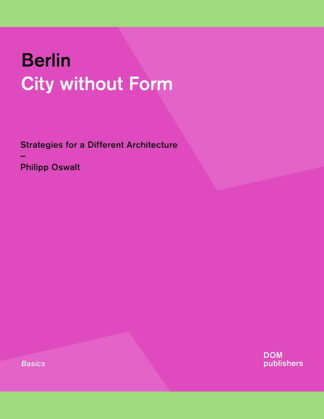 You're viewing: Berlin: City Without Form. Strategies for a Different Architecture €28,00
Add to cart
0